Why are badgers considered “endangered” in British columbia?

The subspecies of badger found in British Columbia (Jeffersonii subspecies) is classified as endangered because:

What kind of animal is a badger?

Badgers are members of the Weasel family, related to wolverines, otters, fishers, martens, and minks. They are the only carnivore in Canada that burrows after and eats other burrowing animals. Badgers are important predators of pocket gophers, marmots, and ground squirrels, and they keep numbers of these rodents in check.

The species of badger that occurs in North America is the North American badger (Taxidea taxus. Photo left) – somewhat related, but quite different, to the European badger (Meles meles. Photo right).

Badgers are very distinctive looking, especially their faces. Badgers have a noticeable white stripe that runs down the top of their head, often from the tip of their nose all the way to their shoulders!

The black cheek patches (called “badges”) are how badgers get their name. Badgers are stout, shaggy animals that look very “flattened” because their hair is short on their backs and long on their sides.

An interesting fact about badger is that their forefeet are much larger than their hindfeet (unlike most mammals). This is because badgers dig for both food and shelter with their front feet, and they have huge front claws and small back claws to do this most efficiently. Don’t worry – badgers do not use their claws as weapons!

Badgers are carnivores and they eat pretty much any small creature they can catch. Their favourite prey includes Columbian ground squirrels (often referred to as “gophers”), yellow-bellied marmots, and northern pocket gophers, but they also eat meadow voles, red-backed voles, grouse, and even the occasional rattlesnake! Badgers capture many of their prey by chasing them into burrows and digging out the hapless prey.

How to spot a badger burrow?

Badgers dig holes that are slightly elliptical or round in shape, on average 24 cm wide and 20 cm high. The burrows created by badgers have distinct horizontal claw marks in the sides of the burrow (often up to 1.5 cm between claw marks) and it is sometimes possible to find badger hairs at the entrance or in the soil that has been excavated. The “plume” of soil at the entrance to the burrow is quite noticeable and often up to 2 metres in length. Holes dug by yellow-bellied marmots are smaller and lack the lateral claw marks, although both species can be occasionally seen coming from the same hole! Dens of coyotes and foxes are bigger than badger burrows and their entrances are often triangular in shape, with the claw marks running vertically from the peak of the entrance.

Check out the Badger Burrow ID Card for more details!

What other animals are commonly mistaken for a badger?

In British Columbia, badgers can sometimes be confused with yellow-bellied marmots. Both live in open forests and dig burrows. However, marmots are rodents that hibernate in winter and are slightly smaller than badgers. The greatest distinguishing characteristics of badger are the white stripe from the nose to the top of the head, white cheeks, and a black patch (“badge”) in front of each ear.

Some animals that may be mistaken for badgers: 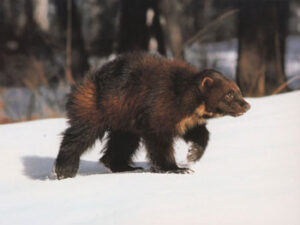 What makes a badger unique?

Badgers have several unique adaptations that make them interesting animals:

Does Parks Canada have resources about badgers in BC?

Absolutely! Please read “The Badger – A Species at Risk” on Parks Canada’s website.